YOUNG engineers proved they had a winning formula after catching the eye of judges in a prestigious national competition.

The Year 9 Blood Hound team from Emmanuel College, Gateshead, took the chequered flag in the team identity category of the national final of the F1 in Schools Challenge.

They were recognised for looking the part and conducting themselves in a professional manner in a contest designed to encourage the next generation of engineers.

The budding engineers were challenged to design and make a balsa wood model car that could be propelled by CO2 gas 20m in the quickest time. They were also judged on a presentation of grand prix project work.

The Year 9 team secured a personal best time of 0.63 seconds, which equates to about 70mph, giving them seventh place from a field of 30.

Colleagues in Year 11, with a much heavier car, were placed sixth in the country, again from 30 teams in their class. 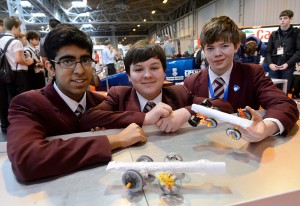 Year 9 team boss Ishank Arora, 13, said: “The national final was an incredible experience and has inspired us to work even harder on our designs. It was amazing gaining some recognition for our team identity and we were all delighted.”

Technology teacher Louise Glover added: “Both teams were an absolute credit to the college and coped extremely well with the pressure.

“Over the three days more than 30,000 people attended the event and the students enjoyed briefing many of them about their work. They are already talking about next year’s competition. The regionals are being hosted by Nissan who have asked the students to showcase their work this June.”