A college has received national recognition and £15,000 for its initiatives to build character in its students.

Emmanuel College in Gateshead is leading the region’s comprehensive schools with its “character first” ethos, which is embedded throughout college life and has seen it win a Department for Education Character Award for the North East.

The Character Awards recognise work to promote “grit and resilience” in young people, improving their job prospects and contribution to society, and preparing them for life in modern Britain.

Katie Collett, policy adviser to the DfE’s Character Education Unit, told the college: “Your application demonstrated excellent practice in character education and was praised by our judging panel for developing the character traits, attributes and behaviours that underpin success in school and work.” 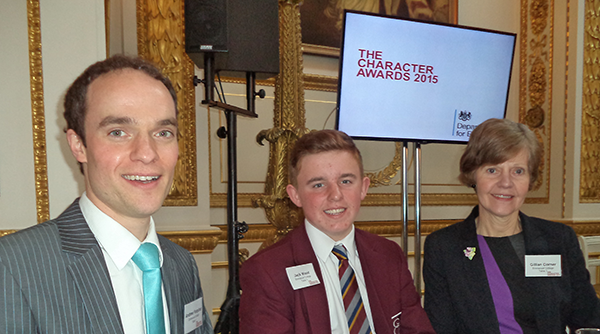 Teachers Andrew Farquhar, who put together the college’s entry, teacher Gillian Corner, a pivotal member of the college’s Duke of Edinburgh programme, and student Jack Wood attended a reception at Lancaster House, in London, to be presented with their award by Secretary of State for Education Nicky Morgan.

Mr Farquhar said Year 10 student Jack embodied the principal of developing character. He plays rugby in and outside college and has been selected as one of the elite players among the Emmanuel Schools Foundation schools to join a ‘Lions’ tour of Scotland later this year. He is also a key member of the college’s F1 in Schools team.

“The vast range of opportunities that have been presented to Jack, which he has embraced, have kept him focused on his work and helped build him as a person,” said Mr Farquhar.

The prize money will be used to support efforts to reach students who are less involved in activities and initiatives to make it easier for them to join in such as providing a late bus to take those who live furthest from college home after post-school activities.

Mr Farquhar believes the determination to build young people of character has a direct impact on their behaviour and academic performance, a theory which is being tested and measured by Leeds University.

He explained: “I strongly believe that participation in activities builds character, that character affects attendance and behaviour, and behaviour affects achievement. Colleagues from Leeds will verify whether that cause and effect analysis is correct, which will be valuable for us as a college and potentially for other schools.”