Young engineers are racing ahead in their engineering careers

Their car may not have taken the chequered flag but young engineers are racing ahead in their engineering careers after their performance on the world stage accelerated their futures in Formula One.

The students from Emmanuel College, in Gateshead, did their region and the country proud as they competed at the prestigious F1 in Schools world finals in Singapore, taking a third place in the world in the presentation test.

Two of the team, who are all aged 17, impressed so much that they came away with coveted scholarships with the Randstad Williams Engineering Academy, a new scheme to find the next generation of Formula One engineers.

Only 11 places were on offer to 350 students from across the globe – and the Emmanuel team took two of them, along with students from Portugal, the USA, Germany and Australia.

Trailblazers Declan Southern and James Rodger will be allocated a Williams engineer as mentor and begin e-learning modules this week, with the goal of joining Williams after university. 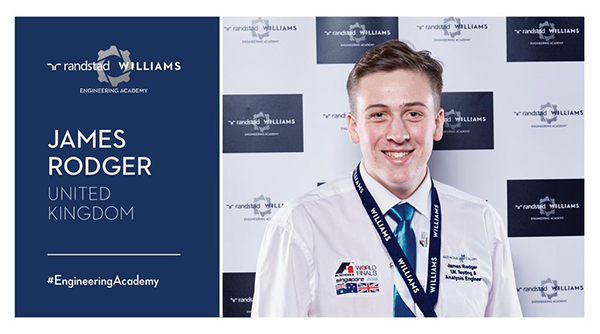 James said: “It was a complete shock to be selected. We’d sent applications and CVs before the competition then found out we were down to the last 25. We had to do group interviews in Singapore and then the winners were announced at a presentation. It gives us a toe in the door – it’s the best chance you could get to have a career in F1.”

Speaking about the selection process Pat Symonds, Chief Technical Officer at Williams, said: “Formula One is a global sport and we wanted to spread our net far and wide to identify some of the world’s brightest and best engineering stars. The first group of students are extremely impressive individuals with a lot of passion.

“We will now be working with Randstad to give these students an early insight into the skills needed to secure a career in Formula One and we look forward to seeing their progress in the coming years.”

The other Emmanuel students, Charlotte Saint and Harry Wilson, made strong contacts with other F1 teams and are hopeful of securing places on similar programmes.

The unexpected opportunities topped off the life-changing experience of competing in the world finals ahead of the Singapore Grand Prix. After securing their place, the team was able to get to Asia thanks to funding from the North East-based Reece Foundation.

As well as the competition itself, the students got to visit the F1 pit lane and were invited to a reception with the British High Commissioner at the Embassy.

“It was an overwhelming, unique and life-changing experience and amazing to be on the world stage of the competition along with 46 other teams and 350 competitors from all over the globe,” said Harry.

Charlotte added: “We really didn’t expect to come third at the nationals and become the first school from the region to make the world finals. It took a while to sink in that we were going to Singapore so when we got there it finally made it real. The standard was a huge increase on the nationals and it was great to compete so well at that level.”

The team came 15th out of 47 overall, taking an outstanding sixth place for engineering and an exceptional third place in the world for their verbal presentation.

Harry said: “Being students at Emmanuel College definitely helped us there. We’ve all done public speaking and drama at school, which gives you the confidence to speak and convey your messages well.”

Communication skills were high on the agenda for team manager Declan, particularly since the team the Emmanuel students were paired with were from Tasmania and all contact in designing and building the car before Singapore had been only via social media and Skype during the summer holidays.

“It was one of the hardest things I’ve ever had to do,” said Declan. “We had to work really closely as a team yet we’d never met and only had a short time to get to know each other. They worked differently to us in that we were quite energised and focused a lot on planning and preparation, but we still worked well together as a team. The lessons I learned from managing a team and communication will be really invaluable for the future.

“We’re keeping in touch with them and lots of others we met. I’ve got lots of Facebook friends from all over the world now.”

The students’ engineering teacher Louise Glover said the camaraderie among the teams at the competition was one of the highlights.

She added: “Everybody helped everybody else. It’s great to win things but it was equally rewarding for me to see the buzz about our team and to watch them enjoying themselves doing what they do. It made all the late nights worth it. I was extremely proud of the way they conducted themselves and they were fantastic ambassadors for the region.”

Despite being in their A level year, the students are planning to take part in next year’s F1 in Schools with the aim of reaching the world finals in Texas.