A chance encounter with The Shadow Chancellor

As Sixth-Form Economics and Politics students departed from our annual Presentation Evening at the Sage, they were reminded to set their alarm clocks for 4:30 am!  Boarding the early morning Newcastle to London express train, coffee and chocolate appeared to be the breakfast of champions.  We settled in for the three-hour journey and looked forward to what proved to be an action-packed day.

First stop was the House of Commons, where our tour guide, Celia, explained how democracy operates in the UK.  Mr Ogborn, Mrs Adkin, and the Politics students handled Celia’s questions with aplomb, whilst the economists were star struck to see Lord Lamont, UK Chancellor in 1992 during the UK’s withdrawal from the Exchange Rate Mechanism on Black Wednesday.

With time to spare before our next appointment, we walked to St James’ Park (not thatSt James’ Park!), passing a heavily fortified Downing Street on our way.  A period of calm was hastily interrupted when an eagle-eyed Lewis Heaney spotted Mr Philip May exiting the rear door of Number 10!  Sprinting to Mr May’s side, Lewis was ushered away before he could engage him in a conversation.  A sign of things to come! 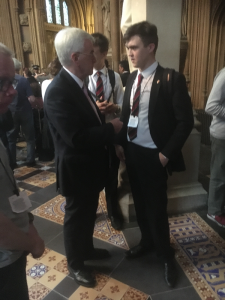 We returned to the Central Lobby at the House of Commons for our scheduled meeting with Mr Ian Mearns, Labour MP for Gateshead.  Before he arrived, Carter Harrison and Jordan Guthrie spotted Mr John McDonnell, Shadow Chancellor, who was busy lending his support to a number of disability activists.  Little did he know that he was about to be interrogated by Guthrie and Harrison about corporation tax and university tuition fees, later describing this in an email to Mr Clarke as “more difficult than a Paxman interview!”.  Indeed, Mr Ogborn watched as their debate became more and more animated, and had to usher the students away before events boiled over!  Ian Mearns restored calm, showing us to a private meeting room where he too fielded questions on a host of topics, from Brexit, to HS2, to the Conservative/DUP party deal.  Both MPs were extremely gracious and very generous hosts.

Next stop, Brewin Dolphin’s London HQ for a careers afternoon, organised by EC alumnus and now Brewin’s Head of Digital Channels and Investment Services, Mr Gareth Johnson.  Brewin’s London offices in Smithfield are more akin to a fine hotel!  We spent a tremendous afternoon listening, learning, and networking with some of Brewin’s most senior executives.  During the afternoon, Gareth and Mr Clarke disappeared for 30 minutes; we were later to discover that Gareth had arranged a surprise get together with Adam French, a former student of Mr Clarke’s, and now CEO of his own investment management company, Scalable Capital.

Bringing the careers event to a close, Gareth left us with some final words of wisdom, advising us to “back ourselves, be ambitious, and be thankful”.  The inaugural economics and politics study visit will live long in our memories and Gareth’s closing remarks have inspired us all!