A-grade explosion is music to the ears at Emmanuel

Students at Emmanuel College in Gateshead have achieved one of the strongest performances at A level the college has seen with more than 40 per cent gaining top grades.

While four students are heading for Oxford and Cambridge Universities, much talent will remain in the North East with six of the top students going to Durham University.

The percentage of A* and A grades is the second best ever at 41.6 per cent. Twenty-four students achieved a full house of A* or A grades, and 40 per cent of students have at least one A or A*.

The success was across subject areas with over 50 per cent of grades in chemistry, economics, drama, English literature, English language, German, maths, RE and history being an A* or A grade. Religious education students did exceptionally well with 67 per cent achieving an A or A*.

In art, drama, English literature, English language, French, RE, technology and German every grade was a C or better.

Principal Matt Waterfield, who was appointed earlier this year, said: “We are very pleased with these results which show success across the board. This reflects not only the subject expertise within our teaching staff but also the considerable effort put in by students to achieve their university ambitions.”

Matthew Fairhurst, one of two boys to achieve four A*s, is taking a year out to work as a teaching assistant in a secondary school in Santiago, Chile, with the charity Project Trust before taking up a place to read Asian and Middle Eastern Studies at Cambridge. 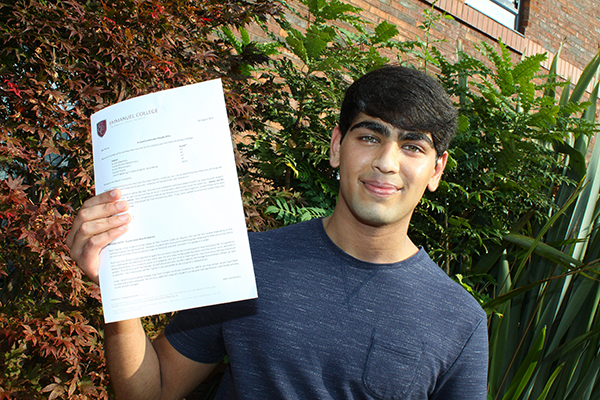 Lauren Johnson has a place to read theology and religious studies at Cambridge University, Andrew Sundin will read physics at Oxford and Alexander Walls will read music at Oxford.

Alexander is one of four A level music students going on to further study in the subject with James Clay taking music at Newcastle University and Charlotte Lynch and Rebecca Pittman-Wood going on to train as primary years music teachers.

The six top students heading for Durham are:

Amelia Calvert, to read English Literature having achieved an A* and two As as well as a Grade 8 Distinction in Public Speaking;

Matthew Cornish to read economics with an A* and two As;

Roxanne Hall to read biomedical sciences with an A* and two As as well Grade 8 Flute and Grade 8 Distinction in Public Speaking;

And Jasmin Sangha who will study sociology.

In this Olympic summer, future Paralympic hopeful Sophie Merrix has already achieved success with two A*s and an A to add to her sporting successes of the last two years. Sophie, a member of British Athletics Parallel Success Academy, will read history at Lancaster University.

There was particular success for economics students. Jack Foley and Satya Srivastava have secured places at The London School of Economics while Joe Donnohue and Michael Iveson will take up places at Edinburgh to study economics, all having achieved straight As.  Olivia Cossey achieved two A*s and an A while Matthew McTeer achieved an A* and two As. Olivia will read international history and politics and Matthew is going to study maths and economics at Leeds University.

Other top students include Andrew Coffell and Jonnie Bolam who have achieved 3 Distinction Stars in engineering. Andrew is going to Northumbria University to do construction engineering.