A young athlete raced away with sporting honours after smashing an historic college record.

Oscar Birney, of Low Fell, set a blistering pace in the minor boys 1500m race to cross the line in a time of 4.55.4 minutes at Emmanuel College’s annual sports day held at Gateshead International Stadium. 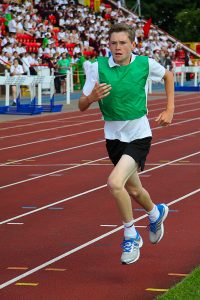 The new record shattered the previous track time set 21 years ago in 1993 by over ten seconds.

Oscar’s win follows a further record breaking run at The North East Regional A final of the National Cup where the elite 12-year-old broke the college’s minor boys 800m record, set in 1994, by six seconds.

He then took a further second off his own 800m record to record a time of 2.25 minutes at the Tyneside Senior Schools Sports Association Championships over the same distance.

“I’d done a lot of practice over the 1500m before the race and was planning to go out to try and break the record,” said Oscar.

“I was really pleased with the run. It was quite hard going but the crowd really carried me on to push for the finish.”

The annual sporting event saw hundreds of 11 to 17-year-old students battle for points for their house teams of Romans, Corinthians and Galatians.

Year 7 student Sam Gorman set a new college high jump record with a leap of 1.49m, breaking his own personal best of 1.45m which had won him first place at the Tyneside Senior Schools Sports Association Championships.

The record capped a winning streak for multi-eventer Sam, 12, of Bensham, who also ran a personal best in the 110m hurdles at the County Pentathlon Championships earlier in the season where he finished seventh in a field of 64 athletes despite being a year younger than many of his competitors.

In the girls’ events, year 7 student Anna Burbridge O’Flaherty took first place in all three of her house events completing the long jump in 3.85m, running 14.3 seconds in the 100m and throwing 14.57m in the discus.

Head of PE at Emmanuel College Simon Leonard said: “Every year we bring our Year 7, 8, 9, 10 and 12 students to the fantastic surroundings of Gateshead International Stadium to compete in track and field events.

“It’s the highlight in our college sporting calendar and a chance for everyone to get involved. Coming to a stadium like this really pushes everyone to try their best whether they are athletically gifted or just doing their best to support their team.”