All the world’s a stage for young performer 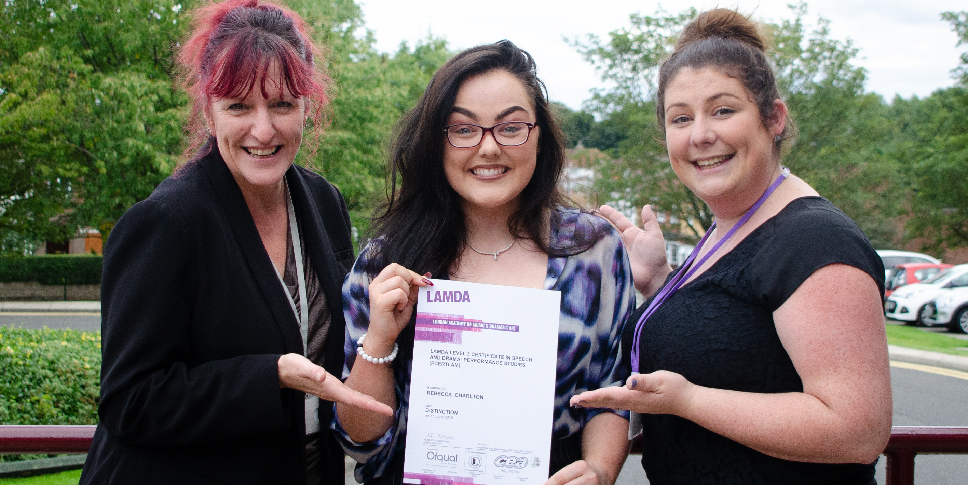 A talented young performer is a step closer to her dream of an all-singing, all-dancing career having been accepted into a highly competitive Drama School.

A Level Drama & Theatre Studies student Rebecca Charlton gained a place at her dream school, the Royal Central School of Speech and Drama, to study BA Hons Drama, Applied Theatre and Education. “I absolutely love it here in London,” she enthused. “The school is everything I dreamed it would be. The course is the perfect amount of performance and academia.”

“All the world’s a stage” is quite literally true for Rebecca, who had an array of options open to her during her gap year before she commenced drama school. In the end she passed on her original idea of travelling in favour of taking up a position as Head Tutor at Drydon CentreStage Academy in Chester Le Street.

Drama School is notoriously popular – with around 150 applicants per place – and provides a perfect stepping stone into the performing arts industry. “Drama Schools prefer experience over exam results – it’s not just about talent” she explained. “So my time at CentreStage was invaluable: I wrote and produced three full-scale children’s productions in a professional theatre and also taught and directed two theatre Summer Schools.”

Rebecca then took the plunge and asked for funding to direct and produce her own full-scale adult production. “I chose the play Be my Baby by Amanda Whittington, and I was able to direct and open to the public my first run with adult actors – my biggest project to date! It was an eye-opener to be behind the scenes and deal with all of the parts you don’t see as an actor, like lights, budget, tech, front of house, and advertising.”

If it was all about talent, the odds would certainly be in her favour: the gifted singer and actress has wowed audiences in school with breath-taking performances in two College productions, Carol Services and many concerts. She took on a key role as Nancy in Oliver! and also starred as Beatrice in Much Ado About Nothing. During her gap year she joined the team as assistant director of our production, Arabian Nights. “It was also so much fun and very enlightening. I’m so grateful to Mrs Wells and the whole team for the opportunity!” she said.

The College productions – which have ranged from musical theatre to Shakespeare over the last few years – provide a unique opportunity for budding young actors to develop their performance technique under the professional guidance of Mrs Wells, Head of Drama, Events Manager and former professional Theatre Director. “The College production is a unique community; each person makes a valuable contribution whether they are in the chorus, backstage or in the lead roles. We all share in the artistic vision of doing the playwright’s work justice, achieving personal best performances and of course entertaining our audience,” said Mrs Wells. “Each student in the Productions – from the Year 7s up to the Year 13s – gets a certain level of personal teaching/mentoring,” added Rebecca. “I’ve noticed the Year 7s gain friendships and become a lot more confident as they embrace something in this different learning environment.”

LAMDA lessons are another opportunity open to all students in College, with numbers tripling to more than 200 since specialist teacher Mrs Pilman joined the Department in 2013. This international qualification run by the London Academy of Music and Dramatic Arts (LAMDA) allows students to choose one of four different disciplines to follow: public speaking, acting, verse and prose, and musical theatre.

“I would recommend LAMDA to absolutely everyone,” enthused Rebecca. “It’s an added bonus that it gives you extra UCAS points. The real benefit is the confidence boost you get from verse and prose and public speaking, and there’s such a unique opportunity to put the new skills into practice in assemblies and other College events.” Adding to her distinction grades in Grade 8 Acting and Grade 8 Musical Theatre, Rebecca returned to College last year to complete three final LAMDA qualifications: Grade 8 in Public Speaking, Grade 8 in Verse and Prose, and a Post-Cert Diploma in LAMDA. The demanding Post-Cert qualification requires a half-hour recital, a half-hour scrutinising on theory and a 6,000-word essay – the culmination of six months’ work. It was the first Post-Cert Emmanuel has ever submitted, and Rebecca achieved a Distinction.

The A Level course in Drama & Theatre Studies provides an excellent foundation for further study. “I’m really thankful that Emmanuel offers Drama at GCSE and A Level,” said Rebecca. “Applications to study at university/Drama School would fall short without it.” Highlights have included the opportunities to see live theatre – be it large-scale, professional touring companies such as The National or innovative companies such as Kneehigh who are expert physical storytellers.

Rebecca chose to combine her Drama studies with English Literature and Geography. “It’s so closely linked to English Literature,” she explained. “Drama allows you to delve behind the scenes from the perspective of the characters and to connect much more deeply on an emotional level. I’ve really enjoyed the opportunity to immerse myself in the works of different playwrights.”

“My A Levels at Emmanuel challenged me in terms of time management and refined in-depth thinking,” Rebecca reflected. “But the dedicated teachers here helped to instil a mentality of ‘don’t take the first rejection as the final answer’”.

Her commitments outside College certainly demanded good time management. Rebecca sought every opportunity to gain experience and throw herself into theatre. Teaching children from 3-14 at the Drydon CentreStage Academy in Chester involved teaching dance, poetry and prose, as well as one showcase and one show every year. She is graduating from Chester Le Street’s Theatre Group, which she has been part of for six years, and also has close connections with Gosforth’s Second Act Theatre.

“As well as playing Nancy in Emmanuel’s production of Oliver!, outside College I took on the role of Wendla in Spring Awakening – a totally different character to the ones I would normally play,” said Rebecca, recalling the highlights of her acting so far. “Playing Rose in Aspects of Love has to be the biggest challenge to date. It was a three-hour show with no speech – just singing. That was vocally challenging but just generally challenging too. I’m not sure how I remembered all the words – I guess I must have a good memory, which helps with exams too!” For her performance, Rebecca was nominated for and won the NODA Youth Award – her second win and third nomination in two years! NODA is a national organisation which recognises rising talent within the amateur dramatic community.

Head of Music and Drama, Mrs Wells, said: “Rebecca has the talent and mentality for this industry where it is as difficult to get into a top Drama School as it is to get a place at Oxford or Cambridge. Rebecca is an outstanding singer and actress but she is also ready to work extremely hard and be diligent in her character work. You have to have a thick skin as an actress; it isn’t about fame and fortune and the rejections come thick and fast! Rebecca is going out into the world to get some life experience that she can bring to her work. Watch this space – I guarantee success for Rebecca!”