Children in Africa are sporting kit sent from a North East college that has shown true team spirit in helping young players in disadvantaged communities.

Emmanuel College, in Gateshead, donated new sweatshirts and enough rugby and hockey tops for three teams, as well as cricket balls and bats, for youngsters in the Caprivi area of Nambia.

The kit and equipment was taken by Thandi Friends Project, a charity run by Alan and Christine Clowes, who run the Cross Keys Inn at Cautley, near Sedbergh.

The project also helps communities around Grabouw, in the Western Cape province of South Africa, where many families live in overcrowded shacks, there is widespread ill health and half the people are HIV positive. 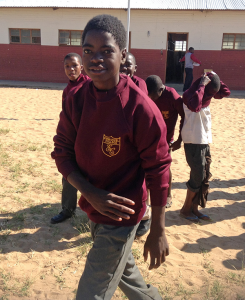 Head of PE at Emmanuel College Simon Leonard explained: “It’s a privilege for us at Emmanuel to link arms with the young people of South Africa, with whom we share a love of sport.

“Thandi Friends project is expanding its work to help more people and they have set up schemes to sponsor children.

“It’s a joy to know that the small contribution we’ve been able to make is putting a smile on these children’s faces.”

The charity’s aim is to empower deprived communities through education, skills development and resources to enable them to help themselves.

In the ten years since it started, the Thandi Friends Project has helped establish a crèche and a farm school in Grabouw and is supporting healthcare and teacher training.