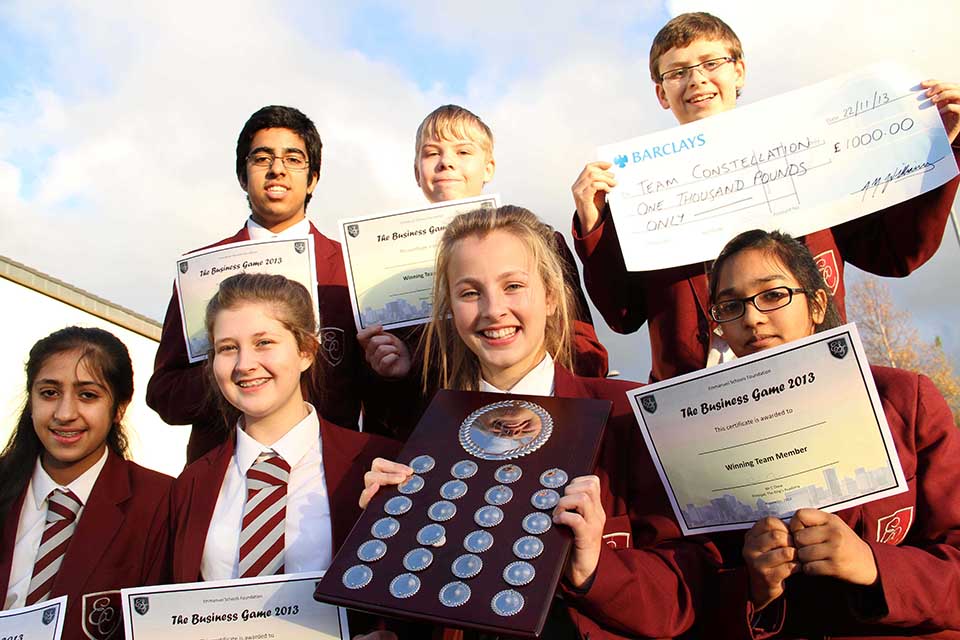 Travelling in style and the country’s inclement weather proved to be the inspiration for young entrepreneurs vying for top honours in an annual business challenge.

Judges were divided over the strength of the ideas in the week-long Business Game run by the Emmanuel Schools Foundation, finally awarding the £1,000 prize to a team from Emmanuel College, Gateshead.

Their Solar Sleeve, with its eco-technology which harnessed the power of the sun to heat drinks, warmed the hearts and minds of the Dragons Den-style panel.

In a close call, a team from sister school The King’s Academy, Middlesbrough, were runners-up with Spa Commute UK, an on-train passenger massage service.

Teams of seven from took part, including others from Bede Academy, in Blyth, and Trinity Academy, Doncaster.

A total of 84 Year 9 students were set the challenge of creating a business idea, conducting market research into its viability, sorting the finances, allocating roles and presenting a pitch to a panel of experts.

They were given the choice of a product or service for developing countries, something that would help schools, an idea to make commuting more enjoyable, kit for sportsmen or women, a household device or an invention to encourage people to be more environmentally friendly.

The shortlist of four to make the final stages also included a mobile water filter, courtesy of Trinity Academy, and Emmanuel College’s Finger Force, a protective glove for sportsmen.

Chairman of the judges Neil Nichols said: “We were hugely impressed by the standard of work. The students showed true grit and determination and we were very impressed with the presentations.”

Emmanuel College student and team MD Jessica Morgan, 13, said: “Our sleeve would be fitted with rechargeable lithium batteries powered by a solar panel and linked to a copper element capable of heating up to 75 degrees. It would be ideal for camping, music festivals, or anything outdoors.”

The King’s MD Millie Smith, 13, added: “I love spas and travel to London quite a lot on the train to see family. Something like this would make the journey a lot more enjoyable.”

Hosted by The King’s Academy, organiser assistant head of sixth form Amy Williams said: “For the week all the students literally run their own companies and it is incredible how professional they become.

“They came up with some fantastic ideas which were completely workable and their enthusiasm indicates that the competition has sparked an entrepreneurial zeal in them which they will carry over into their careers.”