Eight students from the Year 12 German class had the privilege of visiting Murray Edwards College, Cambridge University, to attend a German Translation Day hosted by notable scholars responsible for translating some of the most celebrated literary texts of their time.

The students were first addressed by expert translator Klaus Fritz, who spoke of his experience while reproducing JK Rowling’s most famous texts into his native German language.  His key message for the day was ‘Translation is negotiation’, as he explained the way in which he addressed the issue of capturing the meaning and dramatic effect of a sentence in translation.

Student William Todd said, “I found the day very interesting and learned a lot about the importance of the translator’s role in so many aspects of society – from literary texts to translating the law.”

Students participated in a panel discussion which featured, amongst others, Dr Rowan Williams, the former Archbishop of Canterbury, who was simply introduced as “a poet and translator of poetry from German, Russian and Welsh into English”.  They were then able to put the new tips and tricks to the test in separate translation workshops for GCSE students, A-Level students and teachers. 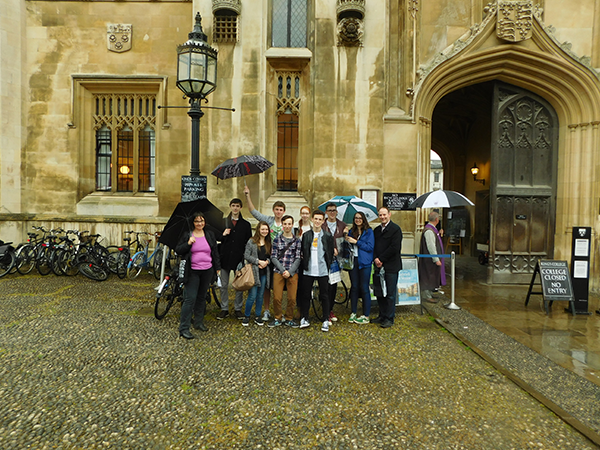 A guided tour of Cambridge and Q&A session with Niall, a friendly first-year student of Physics from Jesus College, provided a great taste of this beautiful city, where students also attended a service at King’s College Chapel, famous for its accomplished choir.  The music was absolutely splendid!

A visit to the exhibition ‘Germans in Britain’ gave the group some interesting insights.  Did you know that when foreign-born people were first included in the census as a special category (1861), Germans were the largest group of foreign-born people living in the UK?

Before leaving Cambridge, the students had the opportunity to go punting down the river Cam and take in the grandeur of the city for one last time.  Many of the students said it was an experience they would never forget.