Declan Southern, a budding engineer is at the front of the grid after being awarded a prestigious accolade by an historic F1 race team

Declan Southern has now started his second year with the Ranstad Williams Engineering Academy, run by the Williams F1 race team, after being awarded the Student of the Year title.

The 18-year-old, of Gateshead, is part of a seven-year programme designed to encourage and train the next generation of top engineers. 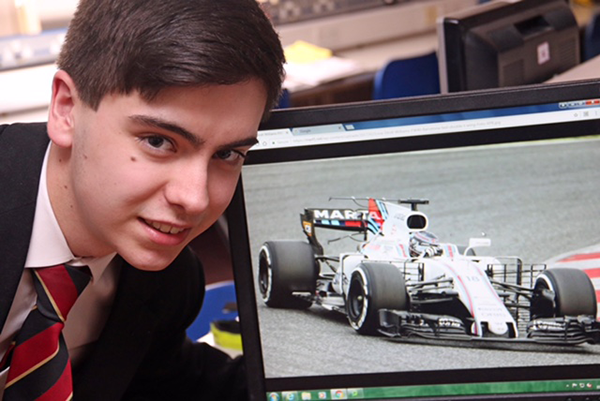 Declan secured the prestigious place after taking part in F1 in Schools with Emmanuel College three years running and last year competing in the final at the Singapore Grand Prix.

This year he has been helping fellow Emmanuel students who have also qualified for the finals due to be held at the Malaysian Grand Prix in September.

“I never imagined five years ago that I could achieve so much,” said Declan, who plans to read a masters in mechanical engineering at Imperial College, London alongside his academy studies.

“F1 in schools really has changed my life. It has opened my eyes and I am totally committed to working in the race division of F1 one day.”

Academic studies are accompanied by hands-on project work and Declan has already helped design a bracket for the front wing that will be tested later in the year.

Declan and his teammates finished a creditable 14th out of 50 teams in Singapore and he has high hopes for his schoolmates to do even better this year.

The current team of Lucy Brooks, 16, Morgan Lisk, 15, Michael Farrell, Aaron Morris and Sam Chapman, all 16, got off to a great start in the UK finals becoming the first ever to score 100 per cent in the verbal element of the national heats.

They were also marked on their pit display, design portfolio, engineering skills and the performance of the CO2-powered race car, which posted a 1.132 second college record sprint time for the 20m run.

Declan said: “I was really proud to see what our current race team achieved at the nationals and I can’t wait to hear how they perform in the finals.

“I was amazed to be awarded the Student of the Year title, which has certainly spurred me on to work even harder and pursue my F1 dreams.”

Emmanuel College Principal Matt Waterfield added: “Declan is a credit to the school and has inspired those who came after him to achieve another place in the final, which is fantastic.

“We feel particularly proud and grateful to be involved with Williams with Sir Frank being an incredible role model for what can be achieved by a North-East lad with a passion and through dedication and hard work.”