Economists mix with the Bank of England’s top brass

What a privilege to be able to host Sir Jon Cunliffe, Deputy Governor of the Bank of England, during his whistle stop tour of the North East where his hectic schedule also included three media interviews, two company visits, and a speech to 150 business leaders! 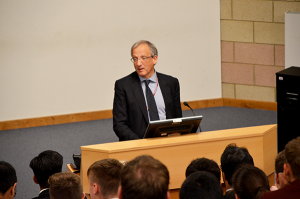 Sir Jon began his lecture by explaining to students that where they start and finish their careers will often be in very different places, citing his own career as a case in point.  The last 20 years have been a fascinating time to be working at the Bank of England.  Sir Jon explained how he worked with Gordon Brown in 1997, drafting the papers which would give the Bank of England its independence.  He explained how, at that time, it was revolutionary for a central bank to make public the minutes of its Monetary Policy Committee (MPC), including how the nine members of the MPC had voted.  The second revolution came after the financial crisis, when the Bank was then given a remit to supervise the banking system, and the Financial Policy Committee (FPC) was created to ensure financial stability.

Unlike the MPC, which has a clear target for CPI inflation of 2%, the FPC has no such numerical target; the only way of knowing if the FPC is achieving financial stability is that we will all know if they’ve lost it!  Sir Jon explained how the FPC considers the tail-risks inherent in the financial sector.  After several years of very subdued growth, the financial sector is now showing signs that it is beginning to take off, as evidenced by very recent articles in the financial press.

As Sir Jon and his entourage literally dashed out of College to his final appointment of the day, staff and students reflected on a fabulous afternoon in Sir Jon’s company.  Let’s hope we can do it again some time!