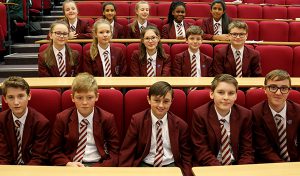 Young entrepreneurs have cleaned up at an annual business challenge after inventing a device to help parents monitor their children’s teeth-brushing.

Toothspy, from Emmanuel College, in Gateshead, beat 11 other teams in the Emmanuel Schools Foundation Business Game, a competition to find the best new enterprise developed by Year 9 students.

Three teams from each of the four sister schools in the Foundation met at The King’s Academy, in Coulby Newham, for the finals when they pitched their ideas to a panel of judges.

Their chosen winners took away a £500 prize to share among the five members of the team.

Toothspy’s toothbrush device records brushing data, which is updated every 24 hours and is transmitted to an app on the parent’s smartphone.

After hearing all the pitches, the judges selected a shortlist of four teams, which also included Pet-Tech animal vacuum cleaners, from Bede Academy, Blyth, Light Tech, a natural light recording device that ensures an individual gets the right balance of light for well-being, from The King’s Academy, and Cosmo, also from Emmanuel College, who developed a combined carbon monoxide and smoke detector. 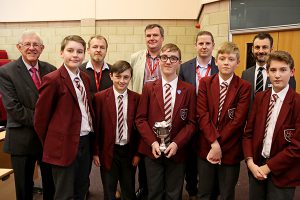 Toothspy, the winning team in the Emmanuel Schools Foundation annual Business Game, with the judges and competition organiser Adam Cooper (back right)

Adam Cooper, head of business and ICT at The King’s Academy who organised the competition, said: “The quality was incredibly high this year. In fact, one of the judges said he doesn’t see many professional pitches that are better than the students’.

“The enterprises were very well researched and were realistic ideas, and the pitches were well thought out and maturely presented.”

King’s Academy principal David Dawes added: “It was very close between the finalists and therefore a very difficult decision for the judges to choose one winner. The students worked very hard and have really flourished.”