As four-time world champion Lewis Hamilton becomes Britain’s most successful Formula One driver, two North East students are at the start of a possible career in the world’s most famous motor racing series.

Michael Farrell and Aaron Morris, from Emmanuel College in Gateshead, have been selected for the prestigious Ranstad Williams Engineering Academy, run by the Williams F1 race team. 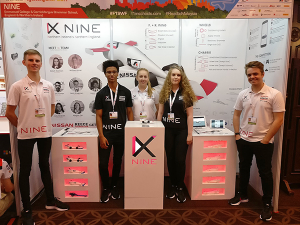 Young people from all over the world compete for the coveted opportunity and Emmanuel has now had four students selected, with one, Declan Southern, through to the third year of a seven-year programme designed to encourage and train the next generation of top engineers.

Michael and Aaron secured their entry to the Academy while competing at the F1 in Schools finals in Malaysia, taking two of only eight places on offer.

Emmanuel head boy Michael, 16, who is studying maths, further maths, physics and music A levels, explained: “We had to apply and got down to the last 25, then had to complete a series of engineering challenges in Malaysia.”

Together with teammates Lucy Brooks, Sam Chapman and Morgan Lisk, they made it to the international event after UK rounds, where for the first time in the 17-year history of the competition, Emmanuel College team members scored 100 per cent in the verbal element of the competition.

In the Malaysia finals they won the Social Media Award, and came 13th overall despite being at a disadvantage when their collaborating school from Ireland pulled out, leaving them with less finance and only half the team members allowed.

They did get the chance to rub shoulders with current F1 drivers including Hamilton, Felipe Massa and Kevin Magnussen, and gained VIP access to the paddock at the Malaysian Grand Prix.

The students had spent hours of their own time designing and constructing the CO2-powered model race car using computer aided design and 3D printing to emulate last year’s Emmanuel team who reached the finals in Singapore in 2016.

Engineering teacher Steve Thomas said: “They did incredibly well in college and at the finals, flying the flag for North East engineering. They are such a mature group of young people and I was so proud to accompany them to Malaysia.” 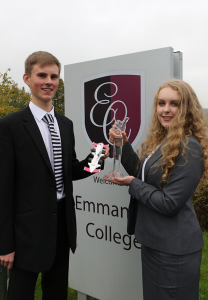 Emmanuel students were once again sponsored by the Reece Foundation and Nissan, who have supported the college in the competition for the last three years.

Emmanuel College Principal Matt Waterfield added: “The team’s tenacity, determination and complete dedication to the project makes them true ambassadors of the college. The fact that they were still able to win an award when put against teams from across the globe, and at a disadvantage as a smaller team, proves what young people of character they are.

“We are extremely proud now to have had four students selected for the prestigious Williams F1 Academy, which reflects the engineering talent we have at Emmanuel.”

The team are aiming to compete again next year and are also mentoring younger teams in college before deciding which to put forward to the regional heat of F1 in Schools.