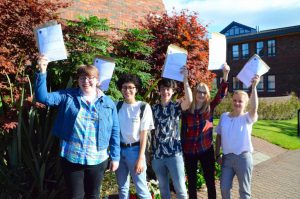 Two students will swap one Emmanuel for another when they leave Tyneside for Cambridge University after achieving top grades in today’s A Levels.

Tilly, who achieved a clean sweep of A*s in chemistry, further mathematics, mathematics and physics, will read natural sciences.

“I was up at 7:30am to check online if I had secured a place at Cambridge,” she said.

“It has been my dream since I was in Year 8 to study physics at an Oxbridge university and there was a lot of screaming and jumping up and down in the Softly household as soon as I saw the word confirmed.

“The next thing I did was text Jonathan to see if he had also been online – we have been friends since we were nine years old so it’s great that we are going to Cambridge together but even better that we will be studying with so many focused, passionate academics.”

Jonathan, who gained two A*s in English Literature and French and two As in music and drama and will study music, added: “I was in the car on my way to pick up my results when I got Tilly’s text.

“I quickly looked on the internet to check when my dad, who was driving, said ‘son, we are proud of you whatever happens’, but I cut him off shouting I’m in and then the whole car erupted.

“I had my doubts as to whether I’d actually make the grade but I had so much support from the staff here at Emmanuel College and now I’m totally overwhelmed.”

With fellow sixth former Charlotte Sefton set to study history, Anna Spence securing her place to read psychology and philosophy and Katie Wilson studing French and German, all at Oxford University, Emmanuel has continued its tradition of sending students to Oxbridge.

Anna, 18, of Benwell, said: “I had a few university options including Durham, Aberdeen and Edinburgh but I didn’t know if I had secured a place at Oxford until I opened my envelope this morning.

“It’s so cool to be going with Charlotte and Katie and to be among the top students in the country learning from some of the best academics in the world.”

The college broke new ground this year with its best ever tally for A*s, with nearly one in five results being at the top grade (up four percentage points on last year to 18 per cent). Within the 100 per cent pass rate, 92 per cent of all grades were A*-C or equivalent across a wide range of courses from art to mathematics. 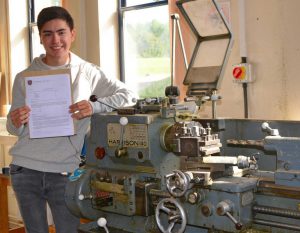 Emmanuel College, Gateshead, A Level student Declan Southern who has won a scholarship with Williams F1 is heading to study engineering at Newcastle University

Formula One engineering student Declan Southern, who has won a scholarship with Williams F1, is off to study engineering at Newcastle University after gaining three As and a B.

Declan, who is also an accomplished musician, originally wanted to study music but, having won the prestigious F1 scholarship, he opted to stay on at Emmanuel for a further year to take A Levels in physics and maths. He has now secured a place to study engineering at degree level as a next step towards becoming a Formula One engineer with top racing team Williams.

Opting for an alternative form of transport, cycling twins Megan and Anna Kay, who have enjoyed success at national level in the sport, are staying in the North East to continue their studies. 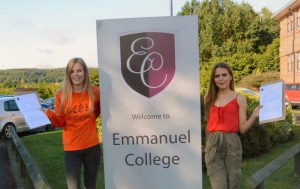 Engineering was one of several departments to achieve 100 per cent of grades at A*-C (or equivalent) with others including BTEC science, art, drama, economics, French, further mathematics, German, music, religious education, technology and Latin.

Principal Matt Waterfield added: “I am immensely proud of the hard work and talent of all of our sixth form students who are going on to study a whole raft of subjects at some of the best universities in the country, which is an endorsement of our character-first approach to education here at Emmanuel College.

“It has also been great to hear such positive comments from proud parents on how they have valued the incredible support given to their sons and daughters by our exceptional staff, both academically and personally, throughout their time with us.”