Students from Emmanuel College, Gateshead, are now developing a nightlight to help autistic children sleep, a directional hand indicator for cyclists and a memory game for Alzheimer’s sufferers.

The Big Bang is the biggest science and engineering contest in the country organised annually to encourage skills among young people.

Emmanuel College students won the regional heat staged at Northumbria University qualifying them for a place at the Big Bang National due to take place at the NEC, Birmingham, in March.

If they are successful they could go to an international event sponsored by Intel, staged in Arizona, USA.

Year 9 students have used their knowledge of electronics to invent devices to benefit the community. 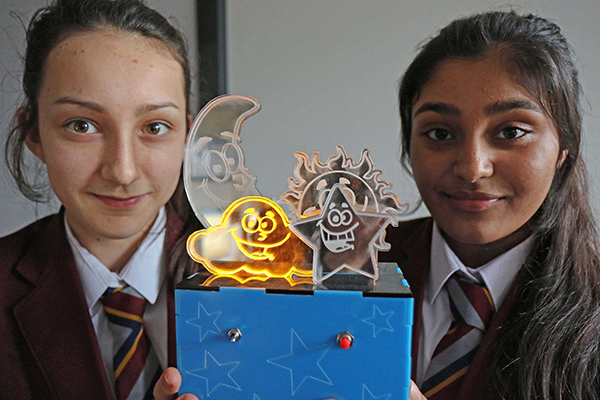 Team Northern Lights, comprising Rebecca Pitchford and Surena Sahota, both 14, discovered that more than half of autistic children struggle to sleep – so they decided to develop a special nightlight.

Surena said: “They are extra sensitive with heightened awareness and are often kept awake by the movement of curtains or the light shining through the crack of the door.

“The nightlight, which changes colour in sequence, concentrates their attention and helps them sleep. If they sleep it also helps the family as well.”

The girls are now developing the light for the final by introducing a communications element whereby the child can let their parents know they are unhappy by pressing a button.

Team Revolution – comprising Jack Spreadbury, Sam Endean, Max Chau, all 15, and Roshan Beadle, 14 – are developing their hand-signal indicator device for cyclists so all the electronics are fitted in a wristband.

The flasher units are attached to cyclists’ hands and are activated by pressing a button against the handlebars. Team members believe they can manufacture the devices at a fraction of the cost of similar indicators on the market.

Jack said: “We spent about six months working on the design for the regional heat and are busy improving it for the finals. We are really looking forward to competing in Birmingham.”

Technology teacher Louise Glover said: “The students’ research was extensive and they have developed ideas that are different, useful and practicable.”