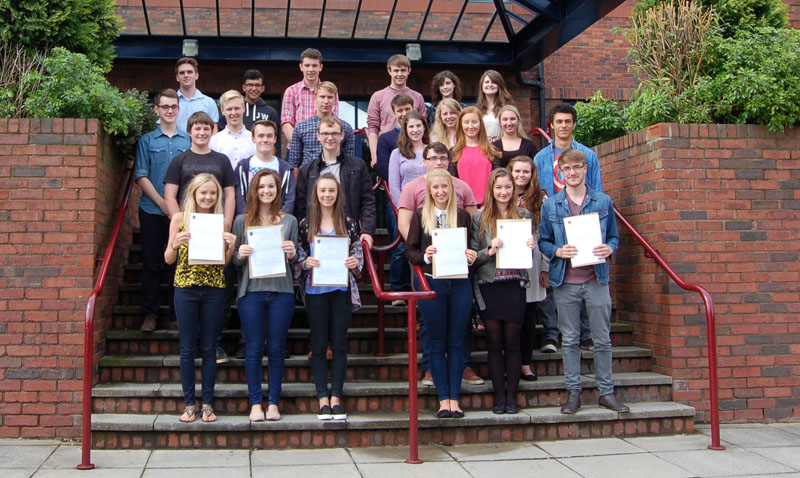 It was A for astonishment – and a spontaneous round of applause – from Year 13 when they learned that between them they had smashed almost every record previous Emmanuel A Level students have set.

41 per cent of all grades were A better and 91 per cent at C or better, within an overall 100 per cent pass rate. 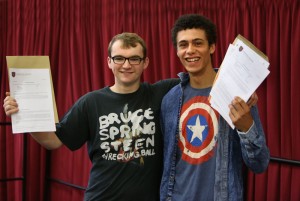 Alex Chadwick, 18, of Gateshead, said: “My teachers were excellent at helping me overcome any challenges that I faced. I’m going to study medicine in Leicester and I couldn’t be more thrilled.”

And a further six students pulled three A*s out of the envelope – Jacob Armstrong, Kristin Forrest, Stefan Spence, Douglas Thomas, Nicola Hall and Peter Winch. Stefan Spence, 18, of Newcastle, said: “I’m really happy with my results and I’m sad to leave but I look forward to going to Durham University to study physics.” 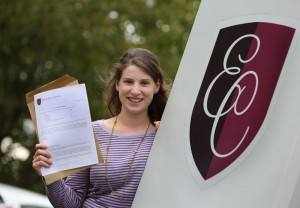 Nicola Hall, 18, originally from South Africa, said: “I’ve loved it at Emmanuel College. The support I have had from teachers has been overwhelming and I couldn’t ask for more.” 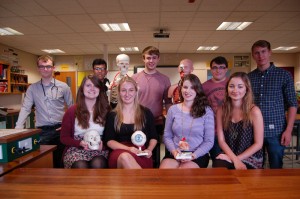 – Jacob Armstrong is to read English and German at Oxford University;

– Joel Wilmore, to read German at Oxford, completing a family double as he follows his sister Hannah;

– Peter Winch is to read Modern and Medieval Languages at Cambridge. Peter, son of Emmanuel Principal Jonathan Winch, is to spend a year in Berlin working with a local church and school before heading to Cambridge. Peter, 18, of Gateshead, who got a 99 per cent pass in maths and 95 per cent in German, said: “The teachers at Emmanuel inspired me, they put in the extra hours to help me out with things and really went the extra mile. I can’t thank them enough. I am looking forward to starting my course at Cambridge.”

Mr Winch said: “This is a magical year for Emmanuel College, with almost all records broken.

“Our approach is always to put character first, as we believe that grades will follow, and these results reflect exceptional integrity and determination.

“It’s a particular pleasure to congratulate students on their success; they have it in them to be world-changers.”

Despite being a specialist City Technology College Emmanuel excels in the creative arts. Dancer Rachael Ward has secured a scholarship at the renowned Cambridge Performing Arts School, one of the leading establishments in the country, to study musical theatre including singing, acting and dancing. Rachael won the Northumberland modern dance championships and was runner up in the ballet competition last year.

Musicians Andy Bell and Catherine Robson have secured places to study music at university after jointly orchestrating an Einaudi piano concerto which premiered at The Sage in July with Andy conducting.

A number of Emmanuel students have combined top academic performances with the college spirit of giving. Ciaran Grant, who is to study social policy at the London School of Economics with three grade As and a further A at AS level, is spending his summer on the streets of New Jersey, working with the charity Urban Promise. Ciaran worked worked with Gateshead ex-offenders and addicts throughout his time in the Sixth Form.

Rebecca Cruxton, who is to train to be a technology teacher at Edge Hill University after securing a triple Distinction Star grade in Engineering and a B in A level technology, served as National Youth Ambassador for St John Ambulance while in the sixth form, mixing with royalty and acting as a host for the organisation’s Commandant-in-Chief The Princess Royal. Rebecca also addressed a congregation of thousands in St Paul’s Cathedral in London.

Emily Ord, who is to study English at Newcastle University, having achieved two A*s and an A, is currently serving as an outdoor education volunteer among children of Ndubaluba, Zambia. Her interest was sparked when she joined the Emmanuel Schools Foundation annual volunteering expedition last year, and she chose to return as soon as possible.