It was all hands on deck for seafaring students as they dropped anchor after returning from a once-in-a-lifetime voyage of adventure.

The annual adventure, on the 60m vessel operated by the Tall Ships Youth Trust, aims to support students’ personal development through being a crew member and playing an active part of life on board ship. 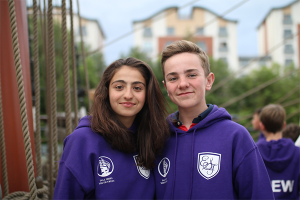 The young sailors formed part of a crew of 27 pupils along with fellow students from sister school, The King’s Academy, Coulby Newham.

After boarding the vessel at the West Indies Dock, in London’s Canary Wharf, the young crew shared in all the ship’s duties including helming, scaling the 50 metre masts, setting and stowing the sails, navigating, scrubbing the decks, cooking for fellow shipmates and night watches on the bridge.

Emmanuel College technology teacher David Mustard said: “This is the eighth time that ESF schools have set sail on a tall ship voyage and the second time that I have accompanied a group of students on the trip.

“My father and grandfather were both engineers at sea and owned their own fishing boats so I guess that a love of the sea must be in the blood – there’s just nothing quite like the peace and tranquillity of being under sail on the open water.

“All of the students have absolutely loved the whole experience. They have made new friends, challenged themselves to learn new skills and for many of them overcome their fears – as well as the odd bout of seasickness.”

Emmanuel students Lucy Lynch-Deakin and Holly Bucknall also took the opportunity to begin training for their START yachting award, the first step on the ladder for young sailors. 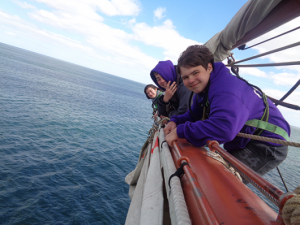 Student Andrew Vaughn, 14, of Gateshead, said: “This is the first time that I’ve been on a real ship and everything about it has been amazing. I was seasick at first but that soon passed.

“The best thing about the voyage was climbing to the top of the masts, which was a bit scarier that I thought it would be, and meeting loads of new friends. It’s really been a unique experience.”