Shipmates: Tall ship crew members from Emmanuel College, who are back on dry land after their voyage on a tall ship

A spectacular sea voyage has whetted the appetite of young adventurers for life aboard ship.

Seventeen students from Emmanuel College, Gateshead, sailed into Blyth, Northumberland, in full voice, high up in the rigging of the tall ship Stavros E Niarchos. 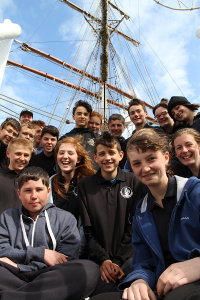 Once on dry land they met up with families keen to hear their stories of life on the ocean wave, before the crew had to be back on board for one more night to get the vessel shipshape.

The trio had been sailing for nine days since leaving Liverpool with the Tall Ships Youth Trust and a crew of 61 including students and staff from the four schools in the Emmanuel Schools Foundation.

ESF commissions a voyage every year to offer Year 9 students a once in a lifetime experience designed to challenge them, build character, teach them new skills and as a reward for students who have put in extra effort.

Emmanuel student Holly Emmett, 14, said: “It’s been amazing, one of the best experiences of my life. Normally I like heights and climbing but I was scared when I climbed the rigging the first time. It’s been a great challenge, I’ve loved it.”

Josh Glencorse, 14, added: “The whole trip has been life-changing. I’ve made lots of new friends I want to keep in touch with. When you’re on watch it’s like a family and we all worked together really well.”

The crew saw seals, dolphins and whales on the voyage and some got to see the Northern Lights as they sailed through the Scottish Islands.

Biology teacher James Ward, who accompanied the group on his fifth tall ship voyage, said good weather and being away during the longest day had provided an experience the students would remember for the rest of their lives. 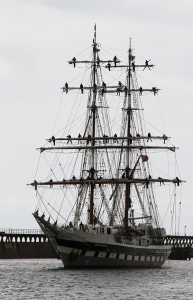 “It’s been an intense trip because of the distance covered in a relatively short time so the students have worked hard. They’ve achieved things they thought they weren’t capable of and learned a lot about teamwork,” he said.

The crew covered 758 nautical miles en route from Liverpool, around the north of Scotland before heading south back to Blyth.