The show is the latest ambitious production to be staged at Emmanuel College, in Gateshead, which is renowned for its high quality shows directed by drama teacher Paula Wells.

This year, the young cast is telling the story of Oliver Twist, the orphan who ends up in the shady underworld of Victorian London after being taken in by loveable rogues Artful Dodger and Fagin before murder and eventual rescue put his life back on track.

A number of students in starring roles are making their college debut in the show, which continues until Thursday night.

Isaac Stamper, 11, of Gateshead, and Patrick Foley, 13, of Low Fell, are sharing the role of Oliver.

Patrick said: “I’m very excited. Oliver has a tough time in the orphanage and then being abused so I’ve tried to put myself in his shoes and imagine what life would be like for him.”

Popular Dodger is being played on alternate nights by Beth Lally, 15, of Springwell Village, and Alex Strother, 14, of Burnopfield.

Alex said: “This is my first role and I wanted to get involved to try something different. I’ve never done anything like this before and I just love it. I watched the movie and Dodger was my favourite character because he’s such a funny guy, but the hardest thing for me has been perfecting the Cockney accent.” 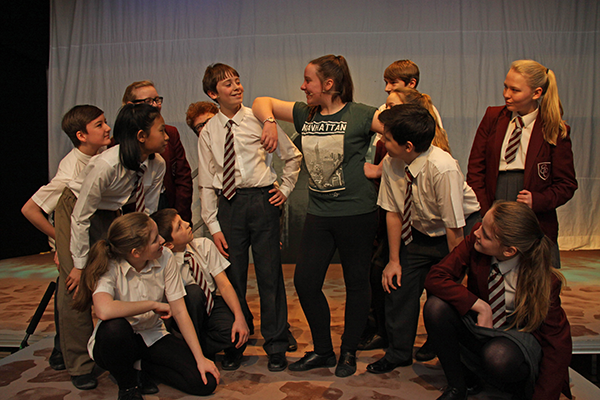 Matthew Penney, 14, of Whickham, who plays tough guy Bill Sykes, added: “Bill is violent and aggressive so it’s a big change to step into his personality.”

Sixth former Jack Manning, 18, of Winlaton Mill, is drawing on his experience in college productions for the demanding role of Fagin.

“I was in Fiddler on the Roof and Wind in the Willows, and worked backstage on Annie. Usually I’m doing lots of naturalistic acting but Fagin is eccentric and theatrical which is refreshing but also quite challenging,” said Jack, who is studying drama at A level along with French and German.

Rebecca Charlton, 17, of Low Fell, has combined learning the role of Nancy with choreographing some of the show’s best known numbers, Consider Yourself and I’d Do Anything, which she has had to teach the younger students.

“They were nervous at first but our Olivers and Dodgers picked it up really quickly. There are some really talented students in Year 7 which bodes well for future productions,” said Rebecca.

New music teacher Miles Cragg is also making his show debut as musical director having joined the college in September, while former students who started their own audio visual company, Undefined Group, while at college have returned to operate sound and lighting.

Mrs Wells said: “A lot of our experienced sixth form actors left last year so we are in a transition year with some new actors coming through. It’s a demanding show and we’ve had to do double rehearsals with two casts. Some roles, like Nancy, Bill and Fagin, who have a lot of life experience, are tough for young people to play, so we’ve done some work on stamina.

“Everyone knows Oliver and the audience will have high expectations, but that pushes us on and everyone has worked really hard.”