Students over the moon with national win

An out-of-this-world experience lies in store for five Emmanuel College students after a meal they designed was chosen to be consumed in space by British astronaut Tim Peake.

In a nationwide competition to design a suitable dinner for Mr Peake to eat on his way to the International Space Station, the quintet’s ‘rocket lolly’ creation prevailed, and Year 9 students Mia Tinnion, Ellie Hiscock, Katie Parry, Suzi Peacock and Nafissa Khan earned a visit to London to meet television chef Heston Blumenthal.

Designing a meal suitable for an astronaut was no easy task – according to Ellie, “everyone else had really good ideas.”

Certain considerations had to be made, such as the need for the meal to produce no crumbs, which would float away inside a spacecraft.  Spicy flavours were incorporated in the knowledge that the sense of taste is diminished in space.

Having been introduced to the competition by their Biology teacher, Mrs Milburn, the students discovered that they had won through an internet video during an IT lesson.

“We screamed!” recalls Mia, who is looking forward to meeting Mr Blumenthal in London, having often seen him on television. 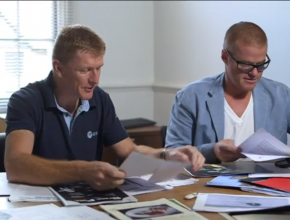 The group has already travelled to Mr Blumenthal’s ‘Fat Duck’ restaurant in Maidstone, where some meals are served with an iPod to enhance the ambiance and the menu includes ice cream made out of nitrogen.

“He’s going to help us improve it,” explains Mia, who regards the competition as a “huge opportunity”.

Comprising a tomato and basil soup, a mackerel curry and an Eton mess to fulfil the required traditional British theme, the students’ meal was selected over thousands of other strong designs, including ‘Mars Bar mousses’ topped with popping candy.

A prototype lolly has already been produced using a high-power freezer, but the texture of the mackerel section may evolve towards a purée.  The design will be eaten in space by Tim Peake in 2015 – and the group will be able to contact him using Skype.

Success has focused media attention upon the girls.  Having already appeared on BBC’s Newsround, they can even find news articles about themselves using Google, and are simply enjoying every moment.  As Mia concludes, “These are probably some of the best experiences we’ll ever have”.

Principal Mr Winch said: “Massive congratulations are due to our girls, whose winning design reflects a good understanding of the science underpinning nutrition and space travel.  The next step for them is to Skype Major Peake in outer space, so let’s hope he enjoys the meal!”