The future is female as girls engineer top exam results

A group of girls from a North East college are set to take up careers in engineering after securing places at top universities.

The girls’ results at Emmanuel College, in Gateshead, were among a series of outstanding grades in A levels and vocational subjects, which will also see four students heading to Oxford and Cambridge Universities and two taking up places to study medicine.

The top performing student was Nikhil Smith, who achieved four A*s and will read maths and economics at Durham University. He said: “I didn’t think I’d do this well so I’m very happy.”

Michael Farrell and Daniel Calland both achieved three A*s and are reading engineering at Oxford University and natural sciences at York respectively.

Daniel said: “It’s been challenging and I was expecting lower grades so it’s a big relief.”

Michael said: “I’m shocked. I felt well prepared for the exams but still didn’t think they’d gone brilliantly. It was a lot of work and everything worked out in the end. I’m really looking forward to getting started at Oxford.”

Holly Ip has a place at Cambridge University to read theology, religion and philosophy of religion. Aaron Shankar and Oliver Hogg are bound for Oxford University, Oliver to study theology and philosophy, and Aaron to read German with beginners’ Portuguese.

Aaron explained: “I didn’t just want to do one language and Portuguese looks to be one of the hardest to learn. I like a challenge and I thought if I could learn that then I could learn anything. A Levels has been a lot of pressure but I’m really happy to be going to Oxford.”

Holly said: “I have wanted to go to Cambridge since I was really young. It became a reality when I got good grades in my GCSEs and I started to think that I could actually do it.

“There was a lot of support at Emmanuel like mock interviews, arranging the summer school at Cambridge and Oxbridge alumni coming in to talk to us, so I felt quite well prepared. However, the exams were absolutely awful and after that all I could was believe in myself.” 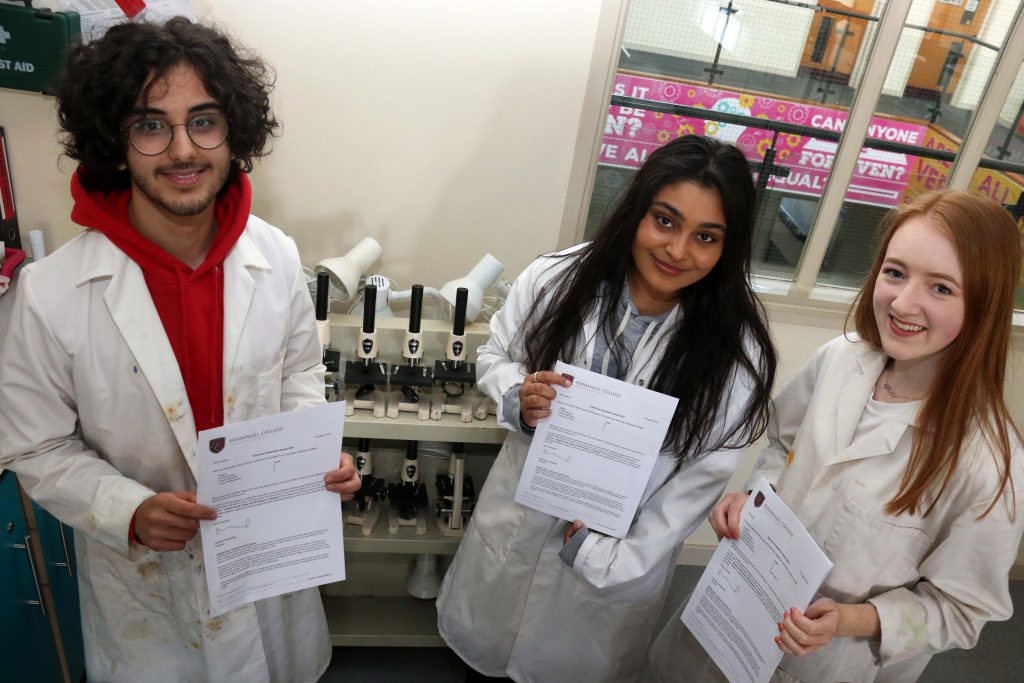 Surena Sahota and Francesca Cockell have confirmed places to study medicine at Sunderland, and Hussein Tuzlaw, who only joined Emmanuel in Year 12, will read medicine at Newcastle, while Kate Clelland will study veterinary medicine at Nottingham.

Hussein said: “I stayed up all night before the results and has time went on I was thinking my grades were lower and lower and by 4am I’d completely failed everything. Actually getting the results has been a massive relief.”

Kate added: “I was two when I started saying I wanted to be a vet so I’m really excited about starting my degree and starting the career I’ve always wanted.”

Over half the top 22 students for UCAS points studied BTEC qualifications in either IT, engineering or business as part of their suite of qualifications, continuing a tradition at Emmanuel College of students succeeding in vocational subjects.

Ellen and Joyce both had their interest sparked when they studied electronics at GCSE.

Joyce explained: “I really liked the coursework and the practical side. My dad does engineering, which also encouraged me. Eventually I’d like to do project management.”

Ellen added: “I really enjoyed the civil engineering I did in work experience and I’d like to go into forensic engineering, where you investigate where things have gone wrong in construction projects.” 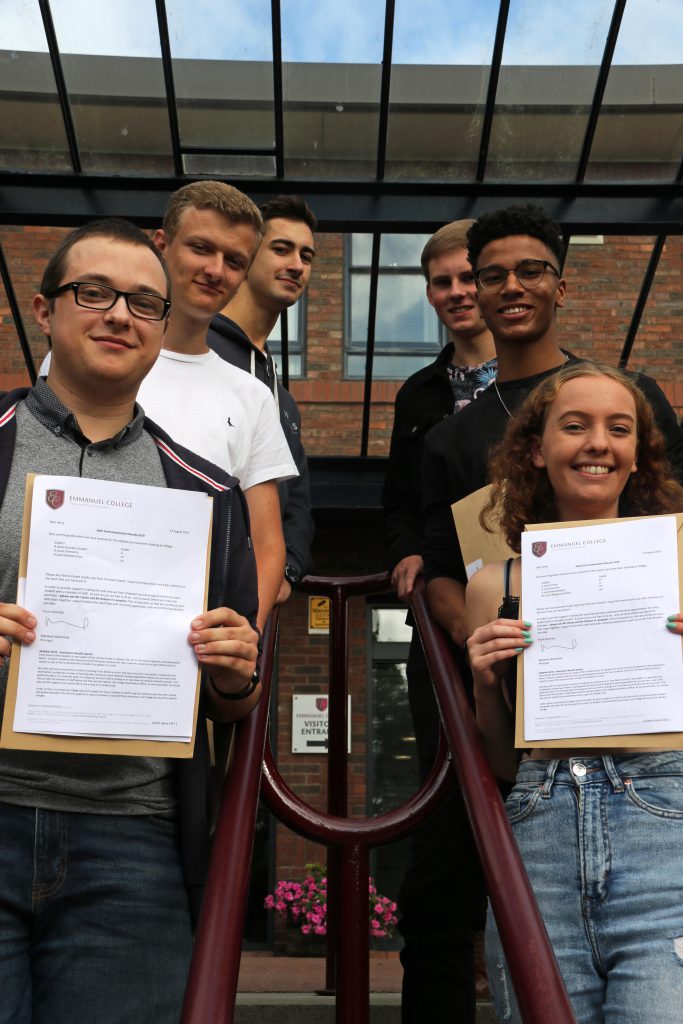 Other top performing students were Harry Smith (computer science at York), Aaron Morris (computer science at Durham) and Anna Corbett (law with French law at UCL), who achieved two A*s and an A, while Alex Smith (law at Durham), Daniel Coulson (maths at Newcastle) and Amy Lloyd (primary education at Northumbria) all achieved two A*s and a B. Roshan Beadle achieved an A* and two As and will study aeronautics and astronautics at Southampton University.

Students who joined Emmanuel later than most have also achieved to a high level. Of the 25 qualifications taken by students new to the sixth form, 96 per cent of grades were a C or above.

Ben McKendrick, who made an impact immediately on joining Emmanuel at the start of Year 12 and was recognised for his commitment and dedication with The John Laing Community Service Trophy, is heading to University College London to study German and Russian with an A*, A and B.

Cydney Mayegun, who started at Emmanuel in Year 9 after growing up in London, is going to Durham to study international relations with an A and two Bs. Alex Keith, who joined the Emmanuel College Sixth Form, will read the same subject at Essex University.
Cydney said: “The transition to Emmanuel was very fast for me because everyone was so friendly. Emmanuel is like my home now. The teachers really helped me and there were lots of opportunities. A Levels were really nerve-wracking but I’m happy with my results.”

This year’s cohort has largely maintained Emmanuel’s record of academic success, with the percentage of students achieving A*s and equivalent grades rising from 14.2 per cent to 16.8 per cent. Overall 49 students, or 37 per cent of the year group, achieved the equivalent of three A grades.

Students from disadvantaged backgrounds attained in line with their peers with only one average point score between them.

Principal Matt Waterfield said: “We celebrate and give thanks, as always, today for the many students who have achieved the university or apprenticeship place of their choice and for those who have been awarded impressive grades that reflect considerable hard work.We also recognise the extra effort that students have put in this year with regard to new A Level qualifications in some subjects, which are undoubtedly more challenging.

“Most of all, I am immensely proud of the character all of our sixth form students have shown in achieving these results and of the potential they have to make the most of their talents, which our exceptional staff have nurtured so well during their time with us.” 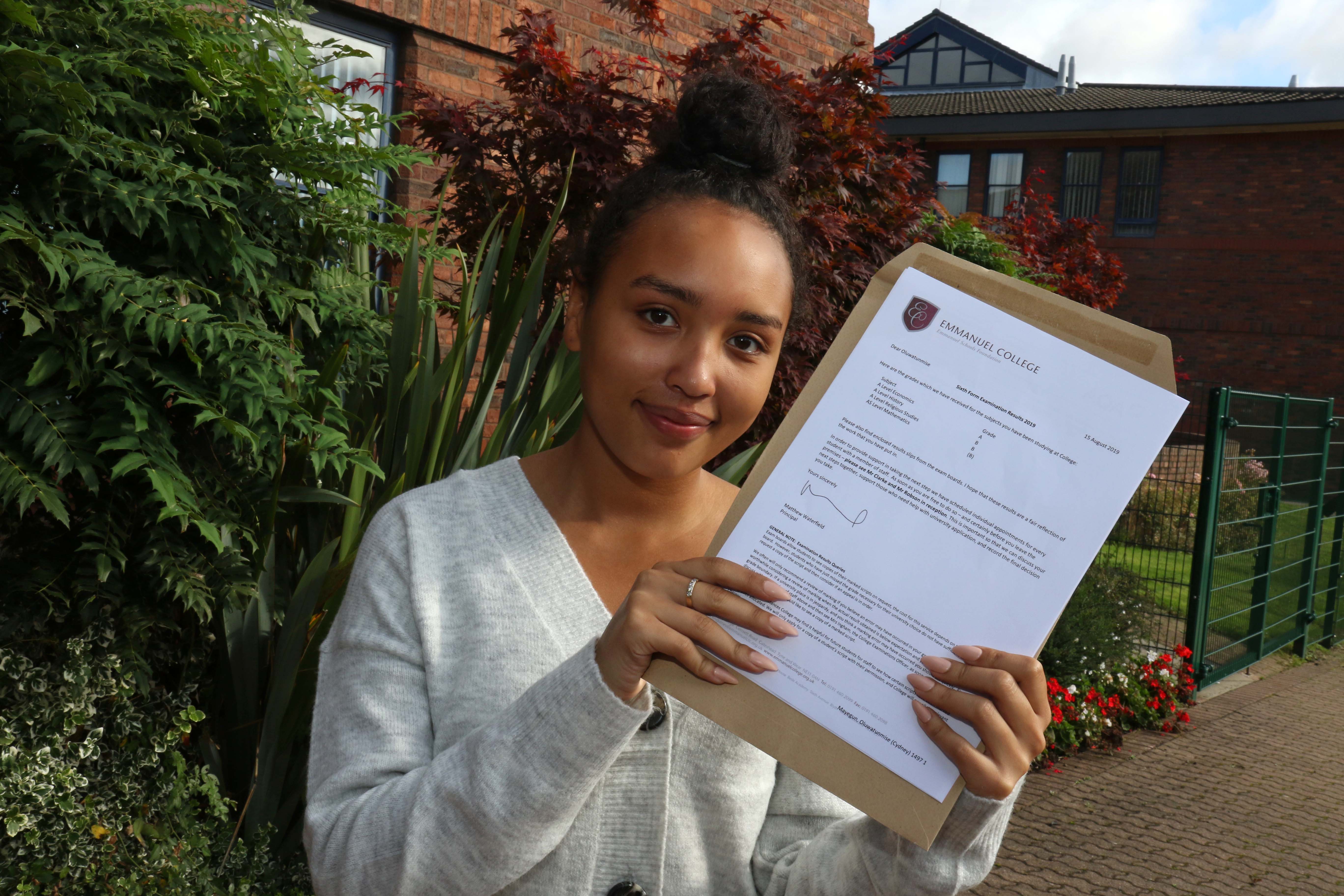 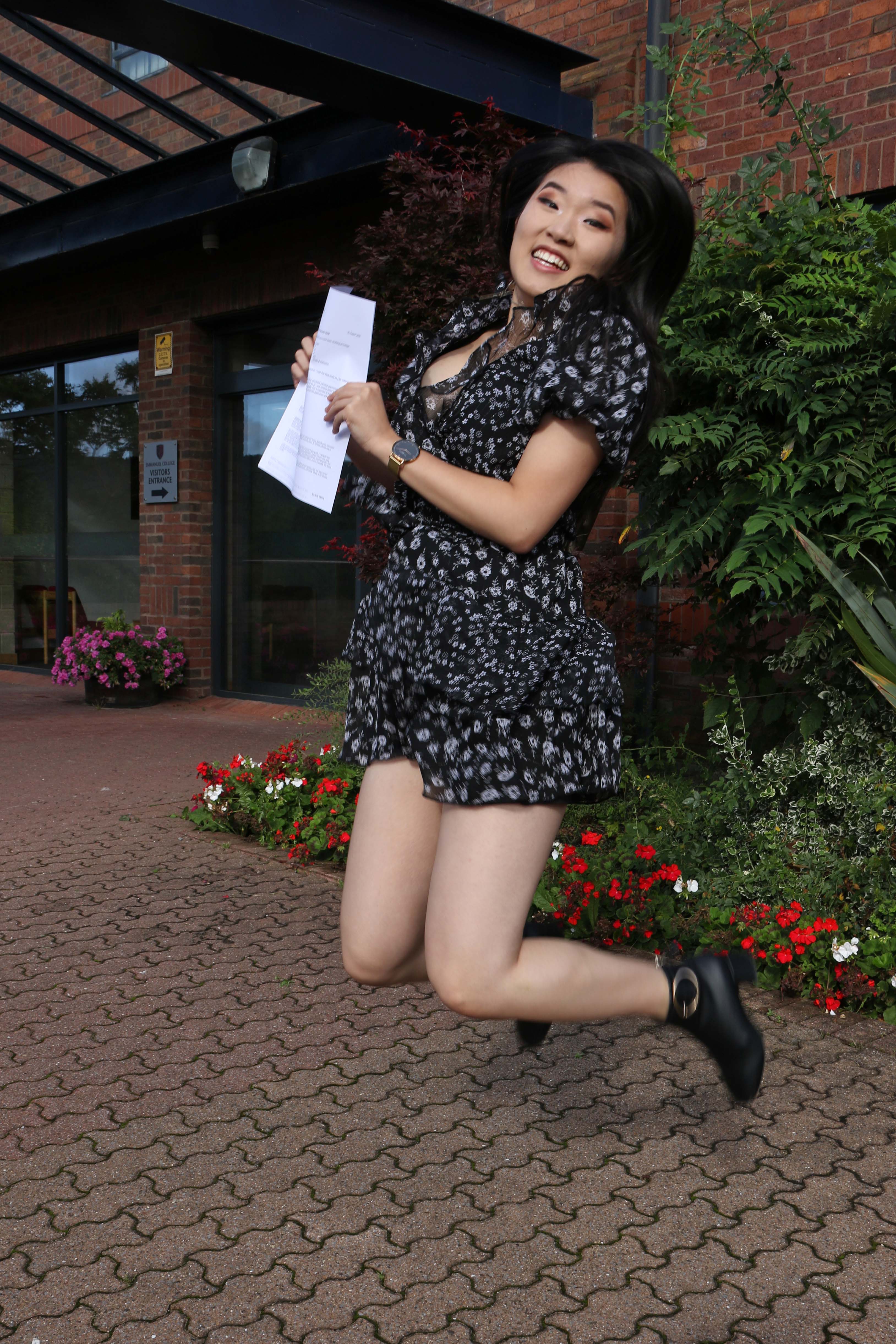 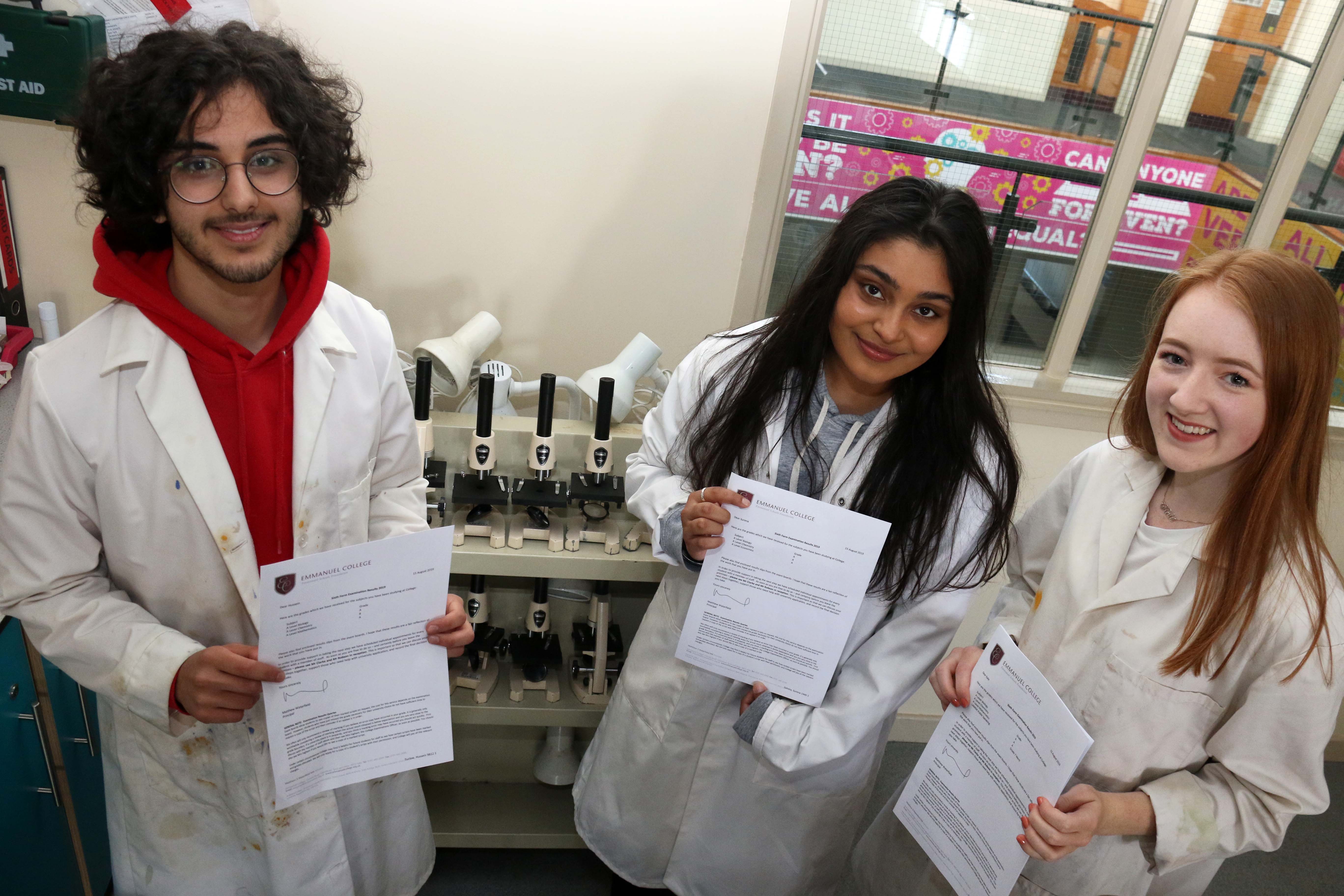 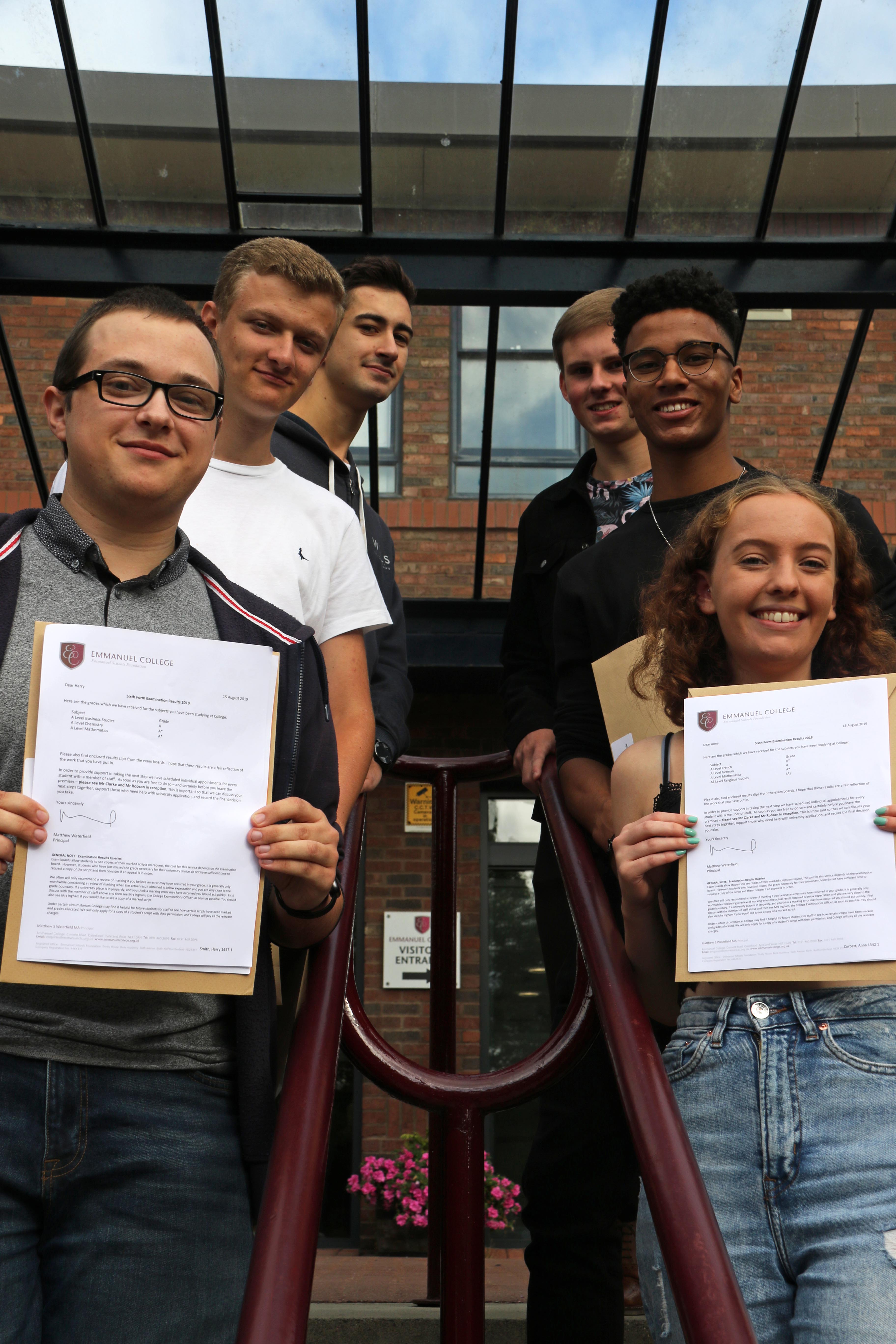 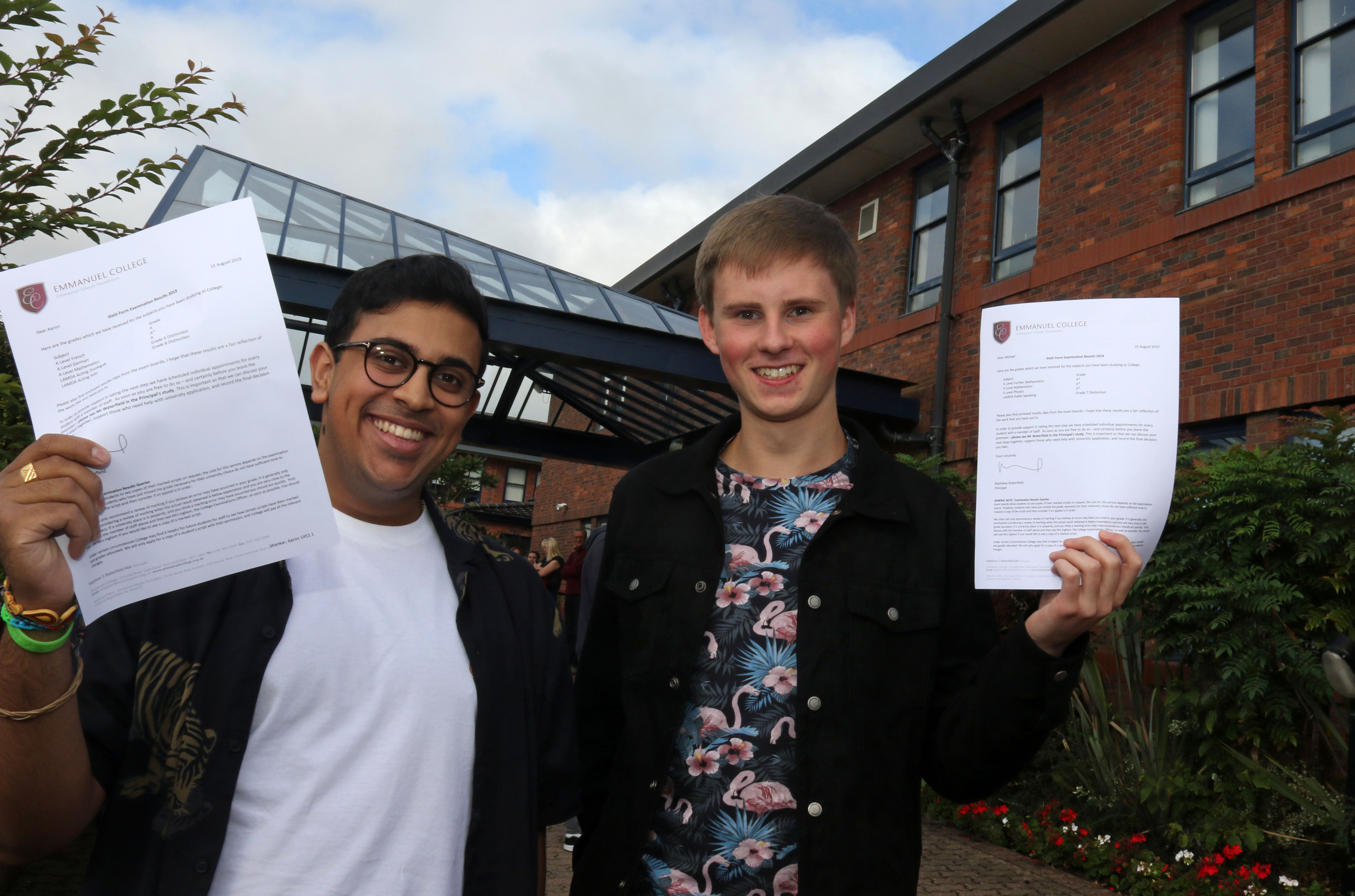