What a triumph, “Antigone” cast wow their audiences

This week was the annual College production, and audiences were, as always, amazed by the talent of the young actors here at Emmanuel. The Music and Drama Department staged the challenging Greek tragedy “Antigone” by Sophocles to rave reviews. On Wednesday we had The Lord Mayor and Lady Mayoress of Newcastle and the Mayor and Mayoress of Gateshead in the audience as well as Dr Jones, a renowned Professor of Classics, who were all in awe at the modernisation of the text and the actors ability to bring these challenging characters to life. The cast created excellent choral scenes in which newsreaders ‘broke the news’ of the Battle of Thebes and the rise of King Creon. Oliver Todd as the Soldier created great humour, Sam Byrne as Antigone created a real passion in her quest for Justice and Zoe Allan was engaingly emotional as her sister. Oluchi Chikwem was highly moving as Prophet Teiresias and rising star Alex Stoves was impressive as Haemon – Creon’s son. The cast were led by the amazing Daniel Thirlaway as Creon, who was equally terrifying as tyrannical Creon and emotionally engaging as the broken King cradling his son in his arms. It was a wonderful week for the cast and crew of the show and our thanks to all those parents, staff and students who came to see “Antigone.” Please click here to view photographs of the performance. 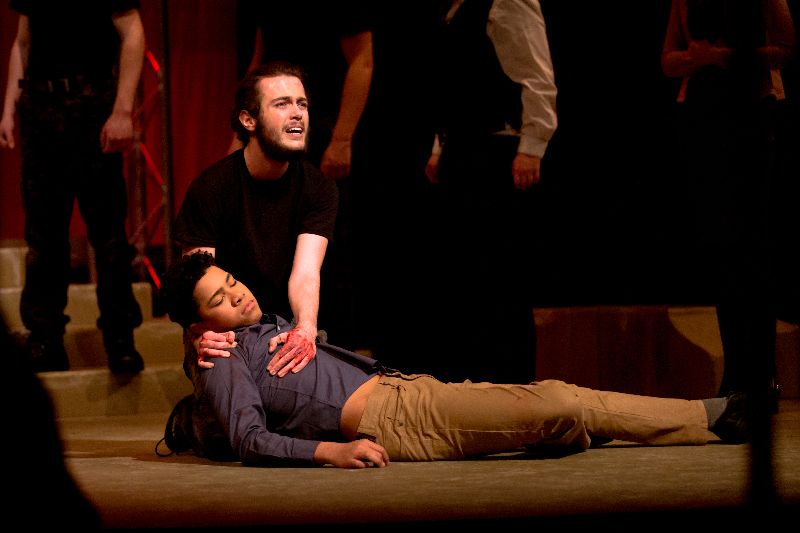