With visits to Virgin Money and speakers from Newcastle and Durham Universities already this term, our recent conference in Edinburgh is yet another highlight in an exciting line-up of events in the Economics department

At 7am, the G Conomics tour bus was fully laden and ready to depart from Emmanuel College.   After a brief pit-stop, where we refuelled on hash browns, we made good time for the Economics Conference hosted at Loretto School, Edinburgh.

The venue for the day was Loretto School’s theatre which comfortably accommodated the 200 delegates, who were mostly from private schools in East and West Lothian.  We had certainly travelled the furthest!

The conference itself was run by the Institute of Economic Affairs and the day was split into four sessions.  The first two sessions, delivered by Dr Steve Davies, focused on the euro crisis and the problems inherent with optimal currency areas.  Not only is this central to GCSE and A Level theory, but it also fits well with Mr Clarke’s current You Tube literacy playlist where he has been reviewing ‘The Euro and its threat to the future of Europe’ by Joseph Stiglitz.  As a group we then went on to consider why an independent Scotland would probably need to have its own currency.  In his second session, Dr Davies gave an inspiring careers talk which made us realise that the possibilities are virtually limitless when armed with an Economics degree. 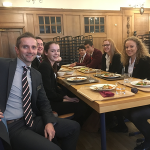 Lunch was served in the main dining hall.  Both the surroundings and the food were something to behold!  Loretto School has its own golf academy and golf course, and the entrance to the dining hall was strewn with golfing paraphernalia!

The afternoon sessions, led by Dr Eamonn Butler and Mr Tom Miers, focused on the economics of politics.  During these sessions, we were split into groups and had to work with students from the other schools, discussing issues such as the relationship between democracy and government expenditure, and whether localism is preferable to big government.  James Smith (13 Simblet) was particularly vocal on these issues!

By coincidence, on meeting the Loretto staff, Mr Clarke discovered that he actually went to school with Mr Harbison, Head of Economics and Senior Housemaster at Loretto.  The old school handshake was in evidence and Mr Clarke hopes that Emmanuel’s visit to Loretto will become a regular calendar event.