Young race engineers have secured a podium place that will catapult them onto the world stage in a life-changing opportunity.

Students from Emmanuel College, Gateshead, have become the first North East team ever to qualify for the world finals of F1 in Schools, due to be staged during the Singapore Grand Prix in September.

The Emmanuel team has the chance to take part in the glamorous F1 weekend where they will be invited into the pits and to a networking dinner, as well as being able to compete for F1 scholarships. They are also invited to the British GP at Silverstone in July.

Every year, 22 million students from 22,000 schools in 42 countries take part in the prestigious F1 in Schools contest.

The final, staged during the Singapore Grand Prix from September 11-20, will feature the top 100 teams. 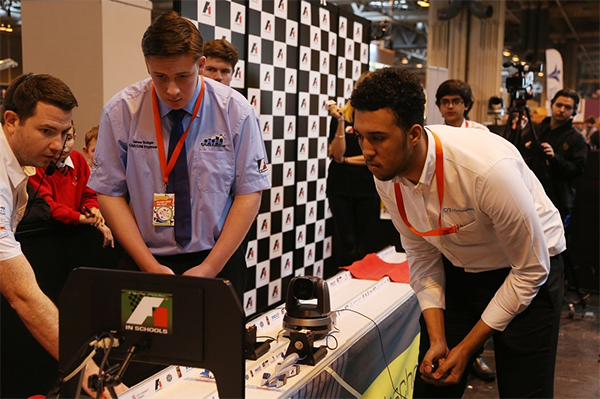 A third place at the nationals, held at Birmingham NEC, was enough to secure the Emmanuel College students a place in the coveted final.

Their efforts saw them just 18 marks adrift of second place and with a clear 70 mark margin from their next closest competitor.

They were also judged on their presentation skills, their pit display, engineering knowledge and 40,000-word portfolio.

Declan said: “We were really anxious and didn’t expect to get through the various rounds. When it came to the announcement it was such a shock.”

James added: “We didn’t expect it and were surprised when we heard other teams talking about us and feeling threatened, like we were the team to beat.”

The students plan to redesign their F1 balsa model car, which was propelled by compressed air down the 20m competition track at more than 40mph, in a top three time of 1.1006 seconds.

Technology teacher Louise Glover said: “This has been the most incredible experience for us all and is potentially life-changing for the students.

“They thoroughly deserve to be at the world finals as they have worked incredibly hard on the car and their portfolio. We can’t wait to compete against the best in the world but have a lot of work to do redesigning the car and raising the funding.”

All the students are hoping to pursue careers in engineering in the automotive industry or motorsport.

Any sponsors who can help support the students’ own fund-raising to get to Singapore are asked to contact Mrs Glover on 0191 460 2099.